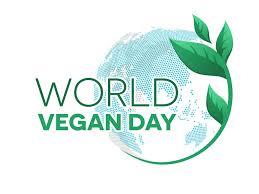 What is veganism? Veganism, the term, was coined back in November 1944 by Donald Watson when he co-founded the Vegan Society in England. The philosophy of veganism rejects the commodity status of animals. He chose the word vegan himself, based on the first three and last two letters of ‘vegetarian’. The new Vegan Society held […]

Veganism, the term, was coined back in November 1944 by Donald Watson when he co-founded the Vegan Society in England. The philosophy of veganism rejects the commodity status of animals. He chose the word vegan himself, based on the first three and last two letters of ‘vegetarian’.

The new Vegan Society held its first meeting in early November at the Attic Club, London. World Vegan Day is held every 1 November to mark the founding of the Society and the month of November is considered by the Society to be World Vegan Month. From 1951 the Society defined veganism as “the doctrine that man should live without exploiting animals”.

Interest in veganism increased in the 2010s, especially in the latter half. The Economist declared 2019 “the year of the vegan”. Chain restaurants began marking vegan items on their menus and supermarkets improved their selection of vegan processed food. The global mock-meat market increased by 18 percent between 2005 and 2010. In 2011, Europe’s first vegan supermarkets appeared in Germany. By 2016, 49% of Americans were drinking plant milk.

In the United Kingdom, the plant milk market increased by 155 percent in two years, from 36 million liters in 2011 to 92 million in 2013. There was a 185% increase in new vegan products between 2012 and 2016 in the UK. In 2017, veganism rose in popularity in Hong Kong and China, particularly among millennials.

China’s vegan market is estimated to rise by more than 17% between 2015 and 2020, which is expected to be “the fastest growth rate internationally in that period”. In total, as of 2016, the largest share of vegan consumers globally currently resides in Asia Pacific with nine percent of people following a vegan diet.

In 2013, the Oktoberfest in Munich — traditionally a meat-heavy event — offered vegan dishes for the first time in its 200-year history.

We might have more vegetarians than anywhere else in the world, yet ignore dogs tortured by crackers and burned alive, elephants chained and forced to beg, battery chickens turned into immobile egg production machines, calves removed from milking cows and bull calves abandoned, horses half-starved, yet used for rides and the whole horrific spectrum of living animal exploitation we see every day.

In the 2005–06 National Health Survey, 1.6% of the surveyed population reported never consuming animal products. Veganism was most common in the states of Gujarat (4.9%) and Maharashtra (4.0%).

Veganism has grown in two types of markets in India. The first is in cities where entrepreneurship and eco-conscious initiatives thrive, like Bangalore, Mumbai and Auroville. The second is in areas with yoga and meditation retreats and ashrams, such as Goa, Rishikesh and Dharamshala. There are several fantastic local and international initiatives that have really moved the needle on vegan education in India.

However, India still has a long way to go when it comes to animal liberation, health and environmental issues as they relate to the vegan movement.

How can you create an impact?

Imagine. Just one person changing their lifestyle will create a ripple effect. Moreover, it is projected that if the world went vegan we could reverse the disastrous effects of global warming and climate change by the year 2050.

I am sure everyone has said it once in their lifetime- “I want to change the world” Today, I’m telling you that you can.

All you need to do?

(Shikha Punjabi is a vegan influencer/activist with a penchant for food, fashion, and footwear. She hates people who think there’s anything “humane” about animal agriculture. Her instagram: Shikha Punjabi )

Written by
Shikha Punjabi
Shikha Punjabi is a vegan influencer/activist with a penchant for food, fashion, and footwear. She hates people who think there’s anything “humane” about animal agriculture.
Recommended Articles