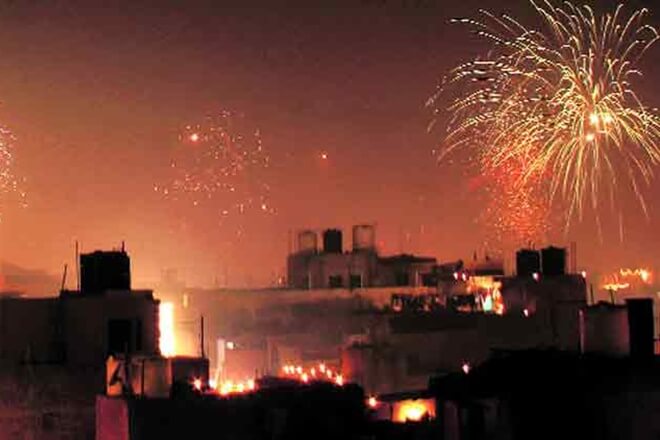 Is it a happy Diwali?
Diwali, the great Indian festival of lights, which marks the Hindu new year, the transition of season from monsoon to winters, the return of King Ram to his capital city of Ayodhya, and the victory of good over evil, among many other symbolisms. Traditionally, Diwali was celebrated by cleaning houses, wearing new clothes, buying gold, […]

Diwali, the great Indian festival of lights, which marks the Hindu new year, the transition of season from monsoon to winters, the return of King Ram to his capital city of Ayodhya, and the victory of good over evil, among many other symbolisms.

Traditionally, Diwali was celebrated by cleaning houses, wearing new clothes, buying gold, praying to gods, and lighting a few lamps & candles. In the early 1900s, globalization and industrialization started to revolutionize the ancient festival of Diwali as well, and firecrackers found their way into the peak of Diwali celebrations

In the name of celebration, various denizens of India add serious amounts of pollution emissions to the mixing pot of atmosphere. Due to colder air, lower boundary layer height, and low wind-speed, this emission finds it difficult to rise and disperse. Instead, it stays in the air and swirls and moves across the North Indian plains destroying lungs and causing irreversible damages to human health.

We analyzed air quality over many years and stations to find the peak pollution instances i.e. the day of the year when the air quality was the worst in any station. The overlay of worst air-day of the year with the most festive day of Diwali was not just a coincidence.

Though there has been a rise of environmental awareness across nations followed by a decline in the use of firecrackers. Yet, there is no dearth of people who find a few sparkles of lights more valuable than the lungs of millions of people.

In the winter months, North India inevitably suffers from an unfortunate mix of events that leads to poor air quality. First, meteorology that creates a decline in wind speed and humidity. Next, as if the baseline of vehicles, power plants, industries, and construction sites were not enough sources of pollution, the farmers from neighboring states of Punjab and Haryana start to dispose of the rice-crop waste in the most un-environmental manner.

A combination of these factors results in a slow and steady rise in pollution numbers from the beginning of October. And then comes Diwali, the day of lights which ends up becoming the day of peak pollution.

With the bad card of metrological factors and existing pollution sources that India is dealt with, the addition of any small amounts of pollution from even a single cracker should be a point of serious contention and legal violation.

The politics and economics of crackers are complicated. In the wake of severe pollution, the apex court banned crackers during Diwali in 2017, running the firecracker industry towards a Rs 1,000-crore loss and layoffs. Economic loss and layoff inevitably mean a vote-bank disruption for any government. Soon, the government research institution NEERI was on its way to devise "green cracker". The commandment, they say, came from the Ministry of Forestry, Environment, and Climate Change.

We can make ourselves feel good with the tag name of Green Crackers, the whole concept is just another greenwashing.

4. Brace yourself, pollution is coming

It is important to remember that Diwali is just the beginning. The problem with air pollution lies as much with a one-day peak as with continued exposure. One day of Diwali peak inflicts damage, but the residual pollution in the air for weeks post the firecracker celebrations lead to consistent damage to health.

5. Can a collective ban of crackers lead the movement of clean air

The first step to solving a problem is recognizing it. And, finally, India has started to tip in favor of air pollution awareness. With a complete social, economic, and legal ban on firecrackers (instead of greenwashing with green crackers), we can achieve a net 10-20% reduction in pollution.

While this will not magically take our air quality to healthy, and there is much room for system-level changes in policy, and business, one action to change this deep-rooted practice of our culture, might just be the start.
A complete stop on firecrackers might just be a beacon.