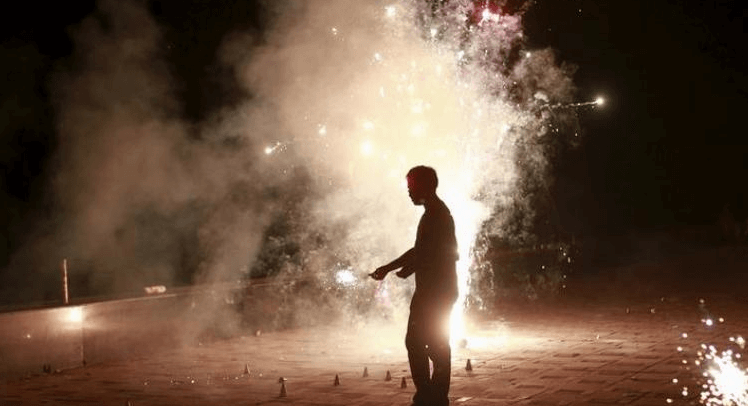 The Science Behind Air Pollution and Bursting of Fire Crackers
7
“If we ever had a proof that the pollution laws in our country aren’t working, it’s reading the list of the chemicals in the bodies of the babies who have not lived outside the womb yet” – Loius Slaughter. Air pollution, how does it happen? While we are sitting comfortably inside the four walls of […]

"If we ever had a proof that the pollution laws in our country aren't working, it’s reading the list of the chemicals in the bodies of the babies who have not lived outside the womb yet" - Loius Slaughter.

Air pollution, how does it happen?

While we are sitting comfortably inside the four walls of our homes, the situation beyond these four walls is getting worse by the day due to increasing air pollution.

The AQI (Air quality index) is the way to measure the number of changes in the pollution in the air. Constant air quality analysis and awareness are extremely important as the increasing pollution levels pose a huge threat to citizen's health. The air in our atmosphere consists of mainly two gases nitrogen(N2,78%) and oxygen(O2,22%). Air pollution occurs when solid and liquid particles called aerosols along with some gases end up in our air.

The aerosol is either directly emitted in the air from its certain sources or as a result of chemical reactions with the air particles. Burning of fossil fuels, industrial emissions, coal, wildfires, etc.

Another major contributor to pollution in the air is the dumping grounds and heaps of garbage accumulated there which are often set ablaze that causes emission of highly toxic gases into air.

The role of firecrackers in air pollution

How can I forget to mention the seasonal but mass contributor, the firecrackers in the festivities?

Millions of people burst crackers during Diwali which leads to a lot of pollution and smog in the air during this phase. Firecrackers mainly consist of Sulphur, carbon and other chemicals for coloring, binding effects. Post the bursting and explosion of firecrackers the chemical components, metal particles and dangerous toxins are released in the air and these toxic components stay in the air for hours contaminating the air and deteriorating the air quality index.

The problem is compounded with Diwali usually celebrated in the month of October- November when many cities face smog and fog. The gases released in the air get trapped in the fog and trigger the pollution levels.

Even healthy people can experience health impacts like respiratory irritation or breathing difficulty due to air pollution. The actual risk of adverse effects on one’s health depends on the current status of his/her health, the pollutant type, and its concentration and the time duration of exposure to the pollutant.

While hearing a petition for a ban on firecrackers, it was brought to the judiciary's notice that the spike in PM 2.5 levels in the air is a severe problem as the particulate matter remains in the people's lungs and causes severe health issues.

The judiciary set aside the ban on firecrackers, its manufacturing and sale, it also directed the manufacturers to follow standard guidelines and standards.

Considering the rate at which the crackers are burst during Diwali, it’s not possible for us to turn a blind eye to the hazardous effects of the pollution caused by these crackers. Ironically, one loses both health and wealth during this time.

The fireworks and crackers manufacturers should adopt more sustainable and organic components and techniques to reduce the pollution caused by the bursting of firecrackers.

While the administration takes the call to regulate and implement strict laws to cater to air pollution we as citizens also owe the responsibility on individual levels to reduce and control air pollution.

(Tanmay Shinde Age-23 is a student of St. Xavier's college Mumbai. He is passionate about the environment and wildlife. He is also a part of #SaveAareyforest movement and supports a more few initiatives for the environment)