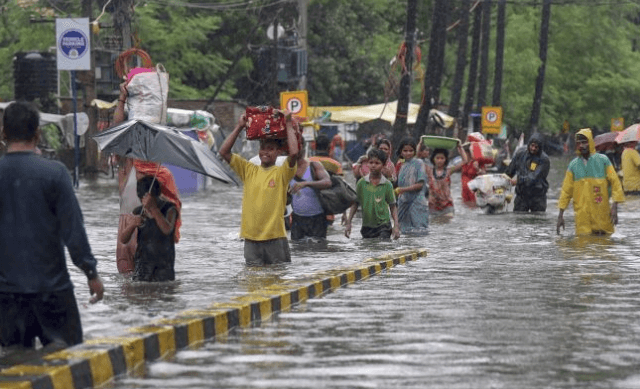 It's been more than a week since my home is drowning. It's been more than a month since I have been there. At the beginning of September, I couldn't stop myself from the constant flood of memories of my colony pandal stories. I couldn't stop thinking of Patna dressed as a bride for the big festive time. Every building and bridge would light up from Navratri till the end of Chhatth. I'm afraid all this might not happen the same way this time.

My Kankarbagh might not be the most happening place this Navratri. Maybe people won't visit Machua Toli for the enormous deity and idols and castle-like decor and apparently Rajendra Nagar won't be a food lovers' paradise.  I wish all this turn out to be untrue. I wish all the tables turn in our favor.

The late upsurge in monsoonal rain has led to incessant rainfall in over a dozen districts of Bihar with three of them - capital Patna, Kaimur and Bhagalpur - being the worst affected. The situation in Patna is particularly bad with many areas submerged under 4-6 feet of floodwater.

Patna has not seen such floods since 1975, both the people and authorities say. Other badly affected districts are Araria, Banka, Munger, Muzaffarpur, and Samastipur.

Around 30 people have died in rain and flood-related incidents. People have blamed the "lackluster" approach by the Nitish Kumar government over the years for this state of flood in Bihar, which was recently hit by a severe drought which followed a devastating flood in many districts.

Relief and rescue operations are being carried out continuously in 15 districts of the northern and eastern parts of the flood-hit state.

No electricity and water all over

My mother who was all alone in the house without electricity or signal and water till the staircase of the first floor, was rescued 5 days ago. She was brought to the Boring Rd area where the situation was under control. Eventually, I came to know that this was the story of every house but what scared me was about the people who could not even approach the rescue team.

The thought of people who are unable to contact anyone especially the elder ones freaked me out. When I saw everything, I felt nothing but crushed. Like my childhood is ruined in one go.

I'm getting constant updates from my family and friends, It's surprisingly amazing to see people standing with each other. Perhaps far before any outside help reached. People are out to help each other. Patnaites are getting through this like one family. It is not about a house, it's about our home plate.

Patna is in the people

We all have one home. We all have one family. The world clearly got to see how Bihar stands with Bihar. The situation might have ripped us apart but our unity has made us last. Patna is in the people.

I saw the news of our deputy CM being rescued that raised a lot of questions in my mind just like everybody else. What happened to one of the largest colonies of Asia? Who didn't maintain it? Where was the plan? How come the buildings are collapsing? Who is responsible for it?

I have never witnessed this kind of waterlogging and flood-like situation in Patna since I was born. This situation is new for Patna, for all of us. I feel guilty about myself and on all of us. The global climate strike is not even over yet and the climate joined hands too. The devastated small city and flooded rural and suburban areas clearly screams that -"None shall be exempted".

It is not only that megacities who'll face the wrath of global warming. The world problem is everyone's problem, there's no question of metro cities or small towns. We're all in this together. It is no high time to wake up, the time is already gone. Our land is drowning and the sky is burning.

Nevertheless, I have hope just the way Patnaites are standing hand in hand very soon the world will too. We can't back down, not right now, there's so much at stake!

(Swadha is a storyteller and works as a freelance creative media person. She has a passion for history and mythology.)