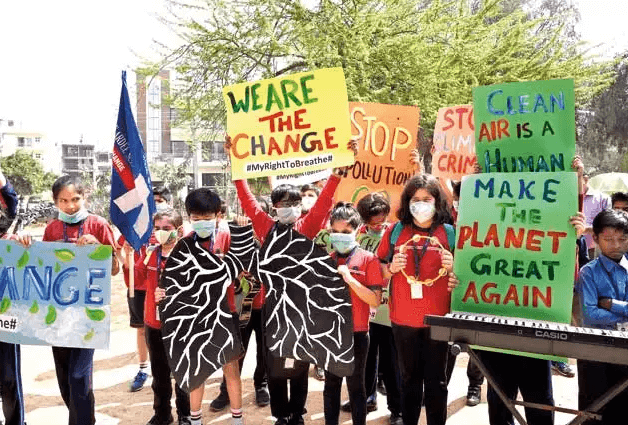 Q&A: 15 Year Old Ajay Prakash Talks About the Indian Youth’s Voice Against Climate Change
Ajay Prakash is a 9th standard student from Uttar Pradesh. Before being found and rescued by Kailash Satyarthi Foundation, he used to work as a car cleaner. He came to Udaipur, Rajasthan in 2015 and has attended many environment related programmes since, sharing his voice on climate breakdown and related issues.  You have been selected […]

Ajay Prakash is a 9th standard student from Uttar Pradesh. Before being found and rescued by Kailash Satyarthi Foundation, he used to work as a car cleaner. He came to Udaipur, Rajasthan in 2015 and has attended many environment related programmes since, sharing his voice on climate breakdown and related issues.

You have been selected as a speaker for the climate and peace summit, Oslo pax, how do you feel about it?

It feels great. I want to talk about a lot of things. We have very less time now. It’s not the time to sit and talk, it’s time to ACT. We need to make people aware about climate change, especially the young ones. We should also discuss this with our parents and family and make them aware.

Who are the climate activists that you admire? Who is your inspiration?

Just a few days ago, I came to know about Greta Thunberg who started the schools strike for climate and became a climate activist. She also wrote a letter to the Prime Minister of India. If she at such a young age can do this, why can’t us?

Why does it matter for youth to have a voice against climate change?

Recently, Amazon rainforest, an ecosystem on which the whole world depends witnessed so many forest fires because of climate change. Even our glaciers are melting at a fast pace. It is time for the youth to come out and speak, not only for themselves, but also for the future generations. Youth should be aware of every aspect of climate change and should act upon it.

What can we do in our daily life to create any small, positive impact on the environment?

Plastics cause a lot of environmental pollution. People throw plastic bags in the rivers which in turn causes water pollution. Burning plastic causes air pollution as it releases carbon dioxide. Even burying plastics in the soil causes soil pollution which destroys crops.

So, it is important to ban the use of plastic at all cost. People should always carry cloth bags when they go to the market. We have so many unused clothes in our homes. They can be utilised for making bags and can be used instead of plastics. If we see someone who is using plastics, we should educate them about its harmful effects on the environment. Keeping your home and surroundings clean is also very important.

Almost every school going kid must have written an essay on air or water pollution and plastics but how much have they themselves followed the steps? Nobody. If we are aware about climate change, then we should act accordingly. We should make people aware about the climate crisis, especially the ones younger to us and our family members. Also, they can talk to their friends and come up with eco-friendly ideas. Peaceful rallies are also another way of making people aware. Young people have to start themselves.