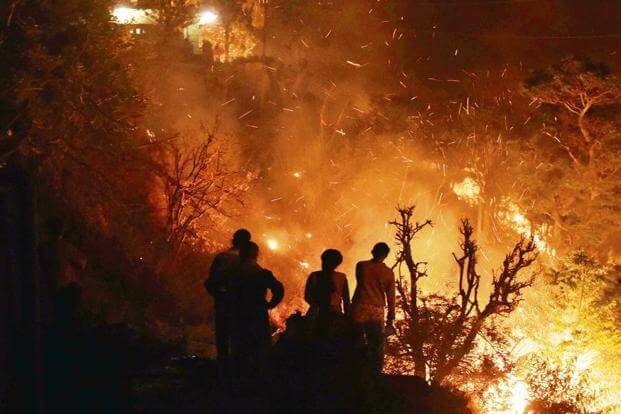 Indian Forest Fires: Are They A Matter Of Concern Too?
From the last few days, we are seeing amazon rainforest fire burning photos all over social media. #Prayforamazonia became a global twitter trend this week. Commentators from all over are suddenly waxing poetic about the devastating loss of the planet’s lungs and criticising Brazil’s new far-right President, Jair Bolsonaro for his failure to protect the […]

From the last few days, we are seeing amazon rainforest fire burning photos all over social media. #Prayforamazonia became a global twitter trend this week. Commentators from all over are suddenly waxing poetic about the devastating loss of the planet’s lungs and criticising Brazil’s new far-right President, Jair Bolsonaro for his failure to protect the environment and for encouraging forest-burning practices among farmers.

While it is a big deal, do you know India too, has witnessed a rise in forest fires from the past year?

The number of forest fires shot up to 14,107  from 4,225 between November 2018 and February 2019 according to the Real Time Forest Alert System of the Forest Survey of India (FSI). The Forest Alert System is part of the large Forest Fire Monitoring Programme that was launched by the FSI on January 16, 2019 using near real time data from the SNPP-VIIRS satellite. Between January 1, 2019, and February 26, 2019, 209 out of 558 forest fires occurred in the five southern states of India — Andhra Pradesh, Karnataka, Tamil Nadu, Telangana and Kerala. That is 37 per cent of the fires.

According to ties of india report, The Uttarakhand forest department has recorded a loss of Rs 23.59 lakh due to ravaging wildfires that have gutted 1369 hectares of forest cover in 1099 fire incidents till date in the state this season. The parliamentary standing committee on science and technology, environment and forests criticised the forest departments of the five states for ineffective utilisation of the forest fire prevention funds in its report Status of Forests in India.

Yet, funds allocated to Andhra Pradesh, Karnataka and Kerala during 2018-19 were increased. It is not just the state forest departments. The Centre too has come under criticism for not releasing enough funds for prevention and management of forest fires.

While India loses Rs 1,176 crore a year to forest fires, a mere Rs 45-50 crore is allocated per annum under the Forest Fire prevention and Management Fund, which remains unspent. Nearly 24 per cent of the meagre forest fire prevention funds were not released and thus, remained unspent in the last two financial years, shows the data provided by the Union Ministry of Environment, Forest and Climate Change (MoEF&CC) in January 2019 in the Lok Sabha. Out of Rs 50 crore allocated during each year — 2017-18 and 2018-19 — Rs 35 crore and Rs 38 crore were released respectively.

While the last parliamentary standing committee acknowledged the fund constraints faced by the MoEF&CC to prevent and fight forest fires and that the allocated funds need to be utilised effectively and strategically. Most state forest departments have protocols to tackle forest fires in place but with the increase in both numbers and intensity of these wildfires, they struggle to contain them. With 2019 set to be the hottest year in India since 1901, drier forest beds and scorching temperatures will only make this constant battle against forest fires tougher. Training and equipping ground-level forest officials is also crucial.

These fires should be treated as disasters so that disaster management authorities can play a major role in preventing them. The National Forest Commission of 2006 too suggested that all fires that burn an area larger than 20 sq km, should be declared a state disaster.

Causing forest fires is illegal under the Indian Forest Act of 1927 and the Wildlife (Protection) Act of 1972. The India State of Forest Report, 2017 highlighted the reasons why people set fire to forests. They include clearing areas for shifting cultivation, clearing forest floor for non-timber forest produce collection, and for hunting/poaching purposes.

The World Bank has pointed out that forest fires also pose a serious threat to India’s ability to expand its forest and tree cover by 2030. This could create an additional carbon sink of 2.5 to 3 billion tonnes of CO2 equivalent, in keeping with its Nationally Determined Contribution, which is at the heart of the Paris Climate Agreement and the achievement of its long-term goals.