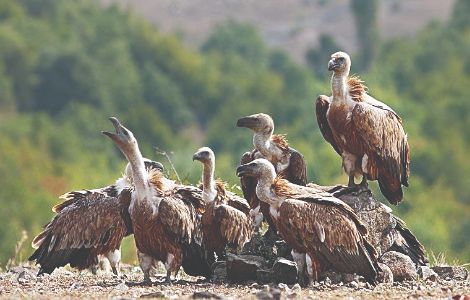 Sharp Decline In Vulture Population, From 40 Million To 19,000: Prakash Javadekar
The Union Environment Minister says the population of three species of endangered resident Gyps vultures – white-backed vulture, long-billed vulture and slender-billed vulture is 6,000, 12,000 and 1,000, respectively. There has been a sharp decline in the population of vultures in the country which has come down from 40 million to 19,000 in a span […]

There has been a sharp decline in the population of vultures in the country which has come down from 40 million to 19,000 in a span of over three decades, the Environment Ministry told the Parliament on Friday.

Responding to a query on the status of vultures in the country, Union Environment Minister Prakash Javadekar said there are three species of critically endangered resident Gyps vultures – white-backed vulture, long-billed vulture and slender-billed vulture – whose population as per the latest figures is 6,000, 12,000 and 1,000, respectively.

The Minister said nationwide vulture surveys are being carried out by the Bombay Natural History Society (BNHS) every four years sponsored by the Ministry of Environment and Forest Departments of various States since 1990.

“The surveys are carried out mainly for the three species of critically endangered resident Gyps vultures. These three species were very common in the country with an estimated population of 40 million in early eighties. Based on the latest survey carried out in 2015 and the results published in 2017, there were about 6,000 White-backed vultures, 12,000 Long-billed vultures and 1,000 Slender-billed vultures,” the Minister said in a written reply.

The major cause of mortality of vultures was found to be the veterinary non-steroidal anti-inflammatory drug ‘Diclofenac’, given to cattle in pain and inflammation.

“Diclofenac was found to be extremely toxic to vultures and causes renal failure. The Government of India banned the veterinary use of the drug in 2006 which was gazetted in 2008, but the misuse of multi-dose vials of human formulation of the drug in treating cattle was still causing mortality in vultures,” Mr. Javadekar said.

On a question whether any vulture breeding centres have been established for their conservation, the Minister said eight Vulture Conservation Breeding Centres (VCBCs) were established in various States.

“Four of the centres, Pinjore in Haryana (established in 2004), Rajabhatkhawa (in 2006) in West Bengal, Rani in Assam (in 2009) and Kerwa near Bhopal (established in 2008) are managed by respective State Forest Departments with support from BNHS and the Union Ministry of Environment,” he said.

“Four more centres i.e. Junagarh in Gujarat (established in 2006), Nandankanan in Odisha (in 2006), Hyderabad in Telangana (in 2006) and Muta in Ranchi are established in State zoos and are being run by State Forest Departments with support from the Central Zoo Authority (CZA) of the Ministry of Environment and technical support from BNHS,” Mr. Javadekar said.

According to the figures, between 2016 and 2019, the government released a total of ₹12.53 crore for vulture conservation to five States - Punjab, Haryana, Kerala, Uttarakhand and West Bengal.

The maximum amount of ₹580 lakh was given to Uttarakhand, the Ministry told the House.

“The Ministry has sanctioned a project to the Indian Veterinary Research Institute (IVRI), Uttar Pradesh titled ‘Assessing the Safety to Vulture (Gyps) of Non-Steroidal Anti-inflammatory Drugs (NSAIDs) in Veterinary Use in India’

“The total project cost is ₹2.71 crore for a period of three years. The project is being implemented by IVRI in collaboration with BNHS. An amount of ₹30 lakh has been released to IVRI as part of the instalment during 2018-19,” the Ministry said.

It said that for protection and conservation of vultures in the country, the government has also upgraded the status of White-backed, Long-billed and Slender-billed vultures from Schedule IV to Schedule I of the Wild Life (Protection) Act, 1972.

To conserve the remnant population of vultures and facilitate their reintroduction into the wild from breeding centres, attempts are being made to create Vulture Safe Zones in the areas where there are vulture populations.

“The area in a radius of 100km around the VCBCs is made secure by community participation by ensuring that there is no use of vulture toxic veterinary NSAIDs, there is enough food and habitat and there is no other threat to vultures. This is done by a targeted advocacy and awareness programme,” it said.

There are eight identified vulture safe zones in India which include Pinjore in Haryana, Rajabhatkhawa in West Bengal, around Majuli Island in Assam, Bukswaha in Bundelkhand, Madhya Pradesh, Dudhwa National Park and Katerniaghat Wildlife Sanctuary in Uttar Pradesh, Hazaribagh in Jharkhand, Central Gujarat and Saurashtra in Gujarat.

The Ministry said it has also taken initiatives to strengthen mass education and awareness for vulture conservation in the country.