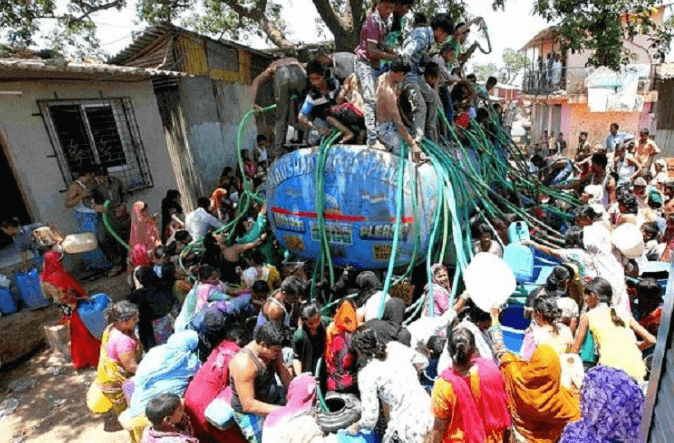 Water Is Life – Treat It Right
2
In 2010, Aurangabad district in Maharashtra grabbed the headlines when it made the record books for placing the biggest bulk order for Mercedes Benz luxury cars; 65 cars worth ₹150 crore were bought in one go. Today, this district is witnessing a booming demand for a completely different kind of product: water tankers. The demand […]

In 2010, Aurangabad district in Maharashtra grabbed the headlines when it made the record books for placing the biggest bulk order for Mercedes Benz luxury cars; 65 cars worth ₹150 crore were bought in one go. Today, this district is witnessing a booming demand for a completely different kind of product: water tankers. The demand for water tankers between the first week of May and the third week of June in Aurangabad doubled, from 3,934 to 7,830, between 2018 and 2019. This shows the deepening ecological crisis of which water scarcity is often a part.

About half of India is facing a drinking water crisis with major economic cities including Bengaluru and Chennai already suffering without a good amount of fresh water for daily chores. According to the Composite Water Management Index (CWMI) by Niti Aayog (A national institution for transforming India) has listed cities like Bengaluru, Chennai, Hyderabad and even the nation's capital Delhi to be among the most vulnerable to the water crisis. A report by the institution in June recently revealed that about 600 million people in India face high to extreme water shortage problems. About three fourth of Indian households do not have access to safe drinking water.

With more than 70 percent of the available water resources being contaminated, India is ranked 120th out of 122 nations in water quality index. About 55 percent of the nation arable land is fed by rain and the Agri sector which makes up 15 percent of Asia's third-largest economy has already begun slowing down.

The major reasons for this problem can be classified as:

Over Exploitation of Groundwater:

India has become the largest user of underground water resources surpassing the US and China. It extracts more groundwater than both of them combined. Groundwater plays a major role and also accounts for more than half of the total requirement of the clean water in the country. Groundwater also amounts to 89 percent in the irrigation sector and households and industry account to 9 and 2 percent respectively. Groundwater has been also used in the urban sector amounting up to 50 percent and 85 percent of rural domestic water needs are satisfied by groundwater.

India produced 0.5 dollars (at 2010 prices) of agricultural GDP for a litre of freshwater withdrawal for agriculture purposes. This figure was 1.4 and 1.6 for China in 2007 and 2012. For Israel, a country which is often seen as a success story in rationalizing water use, this value was 3.9 in 2004 itself. What is most disconcerting is that India has seen virtually no increase in its agricultural output per unit of water use in the last three decades. We need to adopt more robust practices in micro-irrigation using drips/sprinklers etc.

India is a well-rainfed country and it receives enough rainfall annually to meet the requirements of more than 1 billion people. India needs a maximum of 3000 billion cubic meters of water while it receives 4000 billion cubic meters. The real problem arises when it comes to capturing of this essential resource and India captures only 8 percent of it. India also lacks proper treatment of water before discharging it by the households. More than 70 percent is drained as waste flowing through sewages and eventually leading to water bodies.

As India battles to face water shortage it is the need of the hour to improve water efficiency by reducing water leakages and restore the local water resources. We need to head back to traditional techniques of rainwater harvesting and conserve water and use it judiciously.

We need to promote a water-conserving approach among the citizens and need to focus on water storage and reuse water wherever possible.

We need to enlighten citizens and local communities about the importance of water. The civic authorities also must take part in conducting awareness drives among communities and we need to keep a check on our daily usage of water and implement water conservation practices so that each can contribute in the process of saving this precious resource for future needs.

The Government of India recently formed a new Jal Shakti (water) ministry, which aims at tackling water issues with a holistic and integrated perspective on the subject. It had also launched Jal Shakti Abhiyan, which aims to put in place measures for rainwater harvesting, water conservation and replenishing water bodies. It is high time that we act upon these pointers and avoid Chennai/Ahmedabad like situations in the near future.