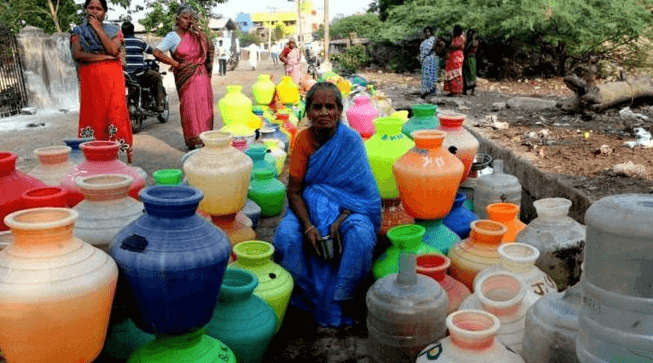 Chennai Faces Severe Water Crisis:All Reservoirs Run Dry
The sixth largest city in India has been in the grip of an acute water shortage. Millions of people are running out of usable water in the southern Indian city of Chennai, which is experiencing major droughts and a rapidly worsening water crisis. The situation in the city has been dire after four of its […]

The sixth largest city in India has been in the grip of an acute water shortage. Millions of people are running out of usable water in the southern Indian city of Chennai, which is experiencing major droughts and a rapidly worsening water crisis. The situation in the city has been dire after four of its main water reservoirs ran completely dry. Lack of rainfall, and low groundwater levels are now dealing a major blow to Chennai's water needs. Though Chennai finally got some rain but is it enough?

The city which is dependent heavily on monsoon rains has started to witness delayed monsoons frequently. Also, temperatures this month have reached 104 degrees. Rainfall dropped by 99% from June 1-19. During that period, Chennai only received 0.3 millimeters of rainfall. Local media reports the reservoirs water levels are some of the lowest in 70 years. Several restaurants, hotels and other businesses have been forced to close. The Chennai metro has turned off air conditioning in the stations. Offices have asked their employees to work from home in order to conserve water. A large number of fish are also said to have died due to the drying of Lake Thiruneermalai.

At least 550 people were arrested in the city of Coimbatore for protesting with empty water containers in front of the municipal Government's headquarters. The Madras’s high court has criticised the Tamil Nadu state government for inaction. The court accused the government of waiting passively for the arrival of the monsoon instead of proactively handling the water crisis. Chief Minister Edapaddi K Palaniswami held an emergency meeting to take stock of the situation. Addressing the press, Palaniswami said the government had allocated Rs 65 crore to transfer by rail water from Jolarpettainear Vellore to Chennai. For the next six months, the government will use rail wagons to bring in 10 MLD (million of litres per day) of water from Jolarpettai, he said. Apart from this, Palaniswami said senior officers were monitoring the situation and coordinating water supply. “Wherever there is a shortage, we have a coordinated system to ensure supply now,” the Chief Minister said.

India is facing the worst water crisis in its history, according to a NITI Aayog report. Twenty-one Indian cities, it has been predicted, will run out of groundwater by 2020, and 40% of the country’s population may not have access to clean drinking water by 2030. NITI Aayog has also stated that India stands on the 120th position out of 122 countries in water quality index.

Send us your video bytes if you are facing water crisis in your city/area on shubham@pluc.in.