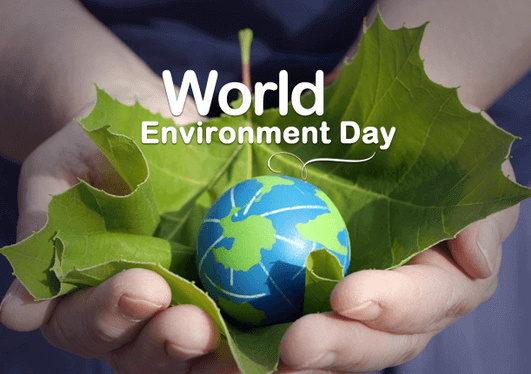 World Environment Day 2019: Beat Air Pollution
World Environment Day, celebrated annually on 5 June is the United Nations day for encouraging worldwide awareness and action to protect our environment. Since it began in 1974, the event has grown to become a global platform for public outreach that is widely celebrated in over 100 countries. The day is celebrated to raise global […]

The main scheduled event is the Mask Challenge, where the UN has urged individuals around the world to choose an action that they will undertake to reduce air pollution, photograph themselves performing this task while wearing a mask and then post this image on social media, tagging other organisations or individuals they wish to get involved in this challenge.

This year in India, Prime Minister Narendra Modi, President Ram Nath Kovind, Vice President Venkaiah Naidu and several other leaders greeted the people on this event with a pledge. PM Modi tweeted, "Our Planet and Environment is something we all cherish greatly. Today on #WorldEnvironmentDay, we reiterate our commitment to ensure a cleaner planet. Living in harmony with nature will lead to a better future."

22 of the world’s 30 most polluted cities are in India. It is also estimated that in 2016, over 9 lakh deaths were caused due to air pollution in India.More than 77% of India’s population is exposed to air pollution levels higher than the national ambient air quality standards.  The poor air quality that citizens are forced to breathe- especially in the heavily polluted cities- has a detrimental impact on their health and well-being. Some cities with high PM 2.5 levels include Faridabad, Varanasi, Gaya, Patna, Delhi, Lucknow, Agra and Delhi.

Also, temperatures have soared across North India this summer, with mercury in parts of Rajasthan having already crossed the 50-degree mark. In South and Central India, a drought stares at people as water tables deplete rapidly. The monsoon, which generally hits the Kerala cost by June 1, is yet to arrive.

The governments of many countries around the world are enforcing policies and plans in order to tackle the issue of air pollution. In Delhi, areas are being divided based on the intensity of air pollution that affects them, with the plan to implement emergency measures, such as stopping the burning of plastics and controlling entry of vehicles.

Citizens did their bit by organizing events in India to discuss about air pollution and find ways to tackle it.

A Plogging event was organised by Plogga India. They plogged in the Aravallis in Gurugram with residents of Suncity Township.  Protecting Forests near a city like Gurugram is crucial. It ranks no. 1 on the most polluted cities in the world list & Aravallis is the only Green lung.

A stakeholders meet is organised on the eve of World Environment Day at Wander Station, Varanasi to understand air and plastic pollution and discuss its solutions and actions to be taken.

#SelfieWithSapling is trended widely in India encouraging citizens to plant as many trees as possible.

What are you doing to save the planet? Share with Let Me Breathe.