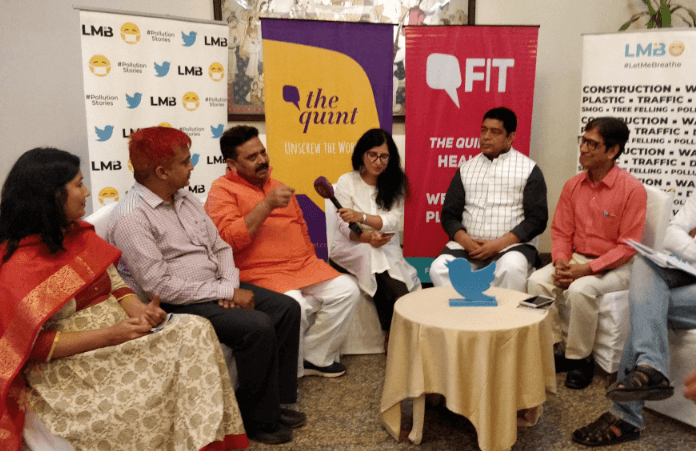 City Sessions is a collaboration of a live show between Twitter India and Let Me breathe, where decision makers, experts and citizens come together to find short term and long term solutions to city level climate change, air pollution and other environment issues collectively.

Let Me Breathe hosted its third city session with Twitter India in Varanasi on 14th May 2019 with the aim of finding collective solutions to all kinds of pollution issues in Varanasi.

The streaming partner of the event was Quint Fit and the city partner was Climate Agenda.

Previously held in Gangtok, and New Delhi, the City Sessions are aimed at building a talking space between decision-makers, citizens and young people that are focused on climate change in their city.

The panelists interacted live with citizens on twitter to tackle some of the most unanswered questions online and also the new upcoming schemes of the Government to tackle pollution in Varanasi.

According to Manoj Rai Dhoopchandi, water pollution is not an easy issue to solve in Varanasi. He added that Samajwadi Party has the vision and make things happen on the ground. They believe in less talk and more work.

While social activist Vallabhacharya Pandey thinks that pollution in Varanasi is caused due to lack of public transport and a lot of planning is required to eliminate pollution.

MLA Ravindra Jaiswal accepts that the Government agencies have a lot to improve on when it comes to handling pollution. He added that ‘Environment destruction is linked to natural causes – we are all affected by it. Let’s not make it political’. He also said that there are plans to bring more electric vehicles to the city.

This elections, political parties have included environmental issues in their manifestos but is it enough? Environment is a big concern and it should be a top priority of every political party.

With City Sessions, we are trying to make environment a mainstream topic If you want city session in your state/city, let us know.