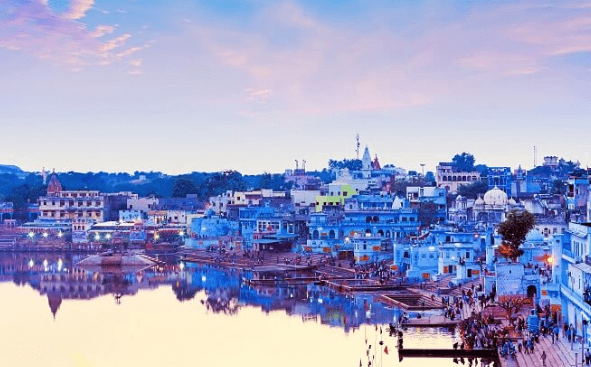 Rajasthan Leads The Country In Highest Number Of Asthma Related Deaths
The strategic location of Jodhpur has enabled the city to become a hub of commercial and tourist activity.. Today, the handicrafts industry has eclipsed all the other industries in the city. Various Indian defence forces also have their base in Jodhpur. A new 9 MMTPA refinery and petrochemical complex, 100 km from Jodhpur, is expected […]

The strategic location of Jodhpur has enabled the city to become a hub of commercial and tourist activity.. Today, the handicrafts industry has eclipsed all the other industries in the city. Various Indian defence forces also have their base in Jodhpur. A new 9 MMTPA refinery and petrochemical complex, 100 km from Jodhpur, is expected to go live by 2022 while the mega Delhi-Mumbai Industrial Corridor Project (DMIC) covering Pali-Jodhpur industrial areas is underway. Together these projects are expected  to bring about immense changes in the landscape, allied and supporting industries, and lifestyles of the region. The result of such rampant industrialisation will be additional pressure on air, water and land through pollution. The traffic composition in Jodhpur is over 70 per cent private ownership of vehicles which indicates that public transport is not adequate. Most road space is congested due due to heavy traffic, encroachments and lack of off-street parking spaces. Even though non-motorised trips make up about 45 per cent of all trips, road infrastructure in Jodhpur does not cater to the needs of pedestrians and cyclists.

Since development in Jodhpur is oriented towards tourism, industrial and education sectors -- all which bring a lot of additional and fluid footfalls in the area, -- it is essential to prepare the road, transport and public spaces accordingly. Jodhpur has been included in NCAP and AMRUT that will enhance the urban quality of life though repeated demands for Smart City inclusion that have not been met. More recently in 2018, Jodhpur ranked 53th out of 111 Indian cities in the Ease of Living Index. Stone quarrying, crushing and mining is a major employer though it also adds to the particulate matter in the atmosphere along with frequent sandstorms. There have not been air pollution studies for the city of Jodhpur as yet. The Comptroller and Auditor General of India (CAG) audit in 2018 observed that RSPCB failed to initiate any effective program to address air pollution in Rajasthan.

The Lancet Global Burden of Disease 2017 report found Rajasthan had the highest death rate in the country due to air pollution reducing life expectancy by 2.5 years. Some of the sources of air pollution include vehicular emissions, construction, road dust, rampant mining, sand storms, brick kilns, industrial emissions and diesel generator sets, garbage (household, street & biomedical) and the burning of leaves, burning of wood/coal as domestic fuel and crop burning in neighbouring states.

A study titled ‘Global Burden of Disease Study 2017’ by the British medical journal Lancet reveals that air pollution is now the second largest cause of pre-mature deaths in India after cardio-vascular diseases. In the 1990s, air pollution was the third largest cause of such deaths in India. Rajasthan is leading the country with the burden of COPD and asthma induced deaths which in turn is linked to air pollution in more than half the cases followed by smoking for a quarter of the cases. Rajasthan has seen a significant rise in respiratory illnesses among children – the group most susceptible to pollution-related problems. The number of children suffering from acute respiratory infection (ARI) has more than doubled in the three-year period between 2010-11 and 2012-13.According to the Annual Health Survey (AHS), 15.9%  per cent of children suffered from ARI in 2012-13, as compared to 11.3 % per cent in 2011-12 and 6.5% per cent in 2010-11. According to the AHS 2012-13 report, urban areas had a higher number of children suffering from ARI compared to rural areas. In urban areas, the figure was 18.7 %, per cent, while in rural areas it was 15.1 %.per cent.

By Scientists & Engineers -
Despite concerns, major automobile giants like such as BMW and Honda are already manufacturing cars which run on hydrogen, although they failed to attractattract  too much demand due to because of the high price of fuel. Responding to this, IIT- Jodhpur has now even applied a patent for this seemingly cheaper process of obtaining hydrogen fuel, which could help India reduce its import dependence by 30 %. per cent. A research team from JIET Jodhpur research team proposed that the internet of things (IOT) to be used to manage garbage collection on time and present a current status of dustbins using a website which could post live updatesd live through sensors.

Actions & Policies by the State Government

Year – 2015
The government of Rajasthan released a new solar policy, aimed at developing 25,000 MW of solar energy to attain self-sufficiency. Rajasthan Solar Policy 2014 would act as an extension to the Jawaharlal Nehru National Solar Mission (JNNSM) and the Rajasthan Solar Energy Policy, 2011 and will remain in force until dismantled.