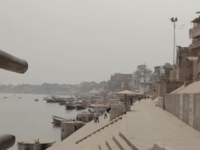 Prime Minister Narendra Modi’s constituency Varanasi turned out to be the worst polluted city. Our 2nd election city, Varanasi, is dealing with extreme air Pollution that has led a health emergency in the city.

After researching, we found out that construction is on of the major cause of pollution in Varanasi. Also, since it is one of the densely populated cities of India, it consists of a variety of pollution sources.

While a few actions have been taken by the state and local city Government, the focus of the MP has been on beautification and infrastructure that do not fully address the primary causes of consistently poor air quality in the city.