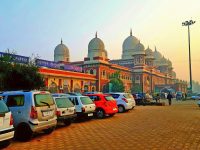 Hope floats for Kanpur, the most polluted city in the world

In recent times Kanpur, one of the largest industrial towns in North India with a population of over 3 million, has been called out for its toxic pollution levels. According to a 2013 survey by the Times Of India  and Janaagraha, a Bengaluru-based non-profit organisation, the city has been rated as the worst city in […]

In recent times Kanpur, one of the largest industrial towns in North India with a population of over 3 million, has been called out for its toxic pollution levels. According to a 2013 survey by the Times Of India  and Janaagraha, a Bengaluru-based non-profit organisation, the city has been rated as the worst city in India to live in.

More recently in 2018, it ranked 75th out of 111 Indian cities in the Ease of Living Index. More damningly, in 2018 the World Health Organisation listed Kanpur as the most polluted city in the world. In February 2019, a study by IIT-Kanpur and Shakti Foundation showed Kanpur suffered poor air quality for 70 per cent of the days between October-November 2018 with PM 2.5 levels crossing 170 microgram/m3. But Kanpur’s Chief Environmental Officer, Kuldeep Misra, rejected these findings. “If the situation was as bad as the WHO describes, we would have been dead by now,” he said.

Experts claim vehicles are to blame for the pollution crisis in Kanpur. The city boasts the highest number of vehicles in the state of Uttar Pradesh with 7,250 public and private new vehicles added to its roads every month. The Central Pollution Control Board (CPCB) report indicates air pollution has gone up by three times the prescribed safe limit. Featuring in the non-attainment cities list of the National Clean Air Programme (NCAP), Kanpur has PM10 and PM2.5 pollutants above the nationally approved safe limits.

In 2011, the CPCB released a National Summary Report on “Air Quality Monitoring, Emission Inventory and Source Apportionment Study” based on monitoring data from six cities (Delhi, Mumbai, Kanpur, Pune, Chennai and Bangalore). According to the report, in Delhi and Kanpur, the monitoring data at almost all locations and in all seasons were higher than the prescribed standards.

Other major sources of pollution in Kanpur include vehicles, industry, restaurants and brick kilns, coal power and DG sets (including in unauthorized markets without legal connection), domestic cooking, garbage burning by municipal workers and residents, construction and road dust, winter bonfire from plastics and tyres. As a result of increasing pollution levels, the number of reported respiratory diseases such as Bronchial asthma, COPD and Pneumonia have tripled since 2013.

But the state government is fighting back. Some of the prevention measures it has taken includes:

February-March 2019: The State government allocated Rs 175 crore for the Kanpur metro rail project in the 2019-20 UP Budget and received Union Cabinet approval for the project to be completed in five years. The UP Metro Rail will connect major public nodes and city clusters through multi-modal integration.

2018 November 2018: The State government asked the civil aviation ministry for approval to promote artificial rains in Kanpur through cloud-seeding.

November 2018: The UP government identified 10 cities, including Kanpur, for a 100 per cent Multi-Modal Electric Public Transport (passenger and goods) overhaul by 2030. The state government released the Electronic Vehicle Manufacturing Policy 2018 to incentivise EV battery and charging infrastructure development in the state through public and private interventions.

The policy also includes incentives to buyers in order to create demand.

Whether these initiatives bear fruit and help to decrease pollution levels in the city remains to be seen.