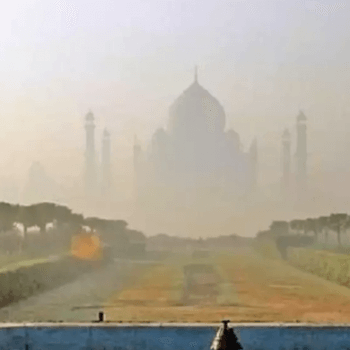 Despite being home to the Taj Mahal and a popular international tourist destination, Agra is one of the most polluted cities in the world. A report by Green Peace revealed Agra was one of the most polluted cities in India. High air pollution levels were observed in Agra in the months of January, April, May, November and December. As an NCAP non-attainment city Agra has six air quality monitoring stations out of which one is continuous (CAMS) reporting data for all types of pollutants.

Agra as a developing city is in the midst of a construction boom while heavy traffic only adds to the problem. Experts say that the main sources of pollution in Agra are vehicular emissions (cars, auto-rickshaws, old trucks and buses), construction, stone quarrying and road dust, coal use by dhabas, brick kilns and diesel generator sets, garbage burning by municipal workers and residents and small and medium industry pollutants.

A study titled Global Burden of Disease Study 2017 by the British medical journal Lancet revealed that air pollution is now the second largest cause of premature deaths in India after cardio-vascular diseases. In the 1990s, air pollution was the third largest cause of such deaths in India. In the article experts from more than 100 institutions, including the Indian Council of Medical Research and the Institute for Health Metrics and Evaluation at the University of Washington, said that Uttar Pradesh had the second-highest disease burden linked directly to air pollution among all Indian states as of 2016, after Rajasthan. In Agra, there has been a marked increase in the number of respiratory diseases reported such as Asthma and COPD. A rise in the number of skin diseases, eye allergies, high blood pressure and heart congestion have also been reported.

To tackle air pollution in Agra, the UP Pollution Control Board in 2018 prepared draft action plan  which recommended strict restrictions on the open burning of municipal and other waste  and the phasing out of commercial diesel vehicles. Due to the cultural significance of the Taj Mahal, the city of Agra is under the supervision of a permanent committee of the Honorable Supreme Court of India to monitor its pollution levels. An area, known as the Taj Trapezium Zone, was carved out to be monitored by this committee.

Steps taken by Agra city stakeholders to address air pollution include:
A study by CEED in collaboration with Indian Institute of Technology, Delhi (IIT-D) revealed that the largest share of premature death burden in Agra, Gaya, Kanpur, Gorakhpur, Lucknow, Patna, Muzaffarpur and Varanasi was attributed to acute lower respiratory infections, primarily emanating from residential (cooking, heating and lighting) sources, followed by industry, transport and energy sectors. “Chronic obstructive pulmonary diseases (COPD) is the cause of the largest share of premature deaths in these cities,” says the study which goes on to recommend that concerned state governments should work towards strengthening public awareness and expediting the process to replace solid fuels with cleaner fuels, besides coordinating with each other to prepare an efficient regional clean air action plan.

Actions and policies by the State Government

2018 November
UP government identified 10 cities including Agra for a plan to set up 100 per cent Multi-Modal Electric Public Transport (passenger and goods) by 2030. The state government released the EV Manufacturing Policy 2018 to incentivize EV battery and charging infrastructure development in the state through public and private interventions. The policy also includes incentives to buyers to create demand.

UP Chief Secretary Rahul Bhatnagar issued directions to senior officials to take “effective measures regularly” to control air pollution in different cities in the state. Asking the government departments to ensure stringent action through a drive against polluting vehicles, Bhatnagar also banned the burning of garbage inside city limits.

In order to make rooftop solar power plants more affordable to the people of Uttar Pradesh, the state government announced an additional subsidy of Rs 15,000 per kilowatt (KW) or a maximum of Rs 30,000 for installation of solar plants after the Centre announced a 30 per cent subsidy on the same. The Archaeological Survey of India’s (ASI) has initiated a fresh study to find out the effects of air pollution on the Taj Mahal. The focus of the study will be on the movement of the wind and on the concentration of particulate matter (PM) on the 17th century monument. To further protect the Taj Mahal, a six-member high-level committee constituted by MoEF&CC has been set up to identify air and non-air polluting industries in the Taj Trapezium Zone area.