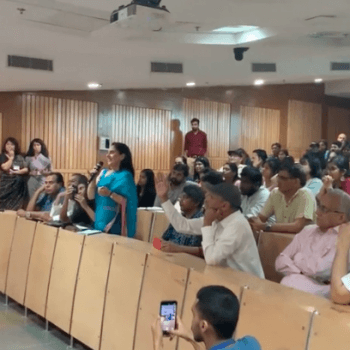 The Delhi Environment And Elections Townhall

‘Environment & Election: A Town Hall’ was organised on 10th April 2019 at IIT Delhi to discuss the alarming rise in pollution levels of air, water and land. All the three parties- BJP, Congress and Aam Aadmi Party made broader promises.

IIT Delhi Alumni Association along with Haiyya and United Residents Joint Action of Delhi (URJA) organised a townhall ‘Environment & Election: A Town Hall’ on 10th April in New Delhi at IIT Delhi with people in public space, students, environmental activists, organizations and residents across Delhi to discuss the rising of pollution levels of air, water and land. The Yamuna is dying, tens of thousands of trees are felled, sanitary landfills are overflowing not to mention the air we choke on everyday. Most of the townhall was driven by the Okhla waste to energy plant protestors and all three parties- BJP, Congress and Aam Aadmi Party made broader promises.