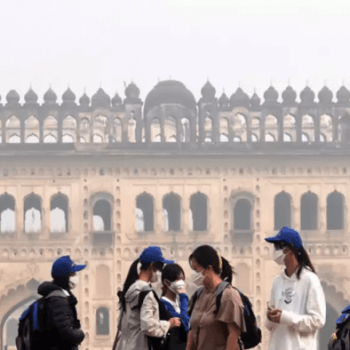 As the capital of the large state of Uttar Pradesh, Lucknow is a key economic base in north India and a prominent trading city. This fast-developing Tier-II city has been selected as part of the Smart City mission to meet investment demand and livelihood needs. This has led to a construction boom on a fast-track […]

As the capital of the large state of Uttar Pradesh, Lucknow is a key economic base in north India and a prominent trading city. This fast-developing Tier-II city has been selected as part of the Smart City mission to meet investment demand and livelihood needs. This has led to a construction boom on a fast-track basis that has catapulted the once genteel Lucknow into the list of top polluted cities in India. The Ease of Living index released by the Ministry of Housing & Urban Affairs places Lucknow at the 73rd place out of 111 cities in India. The index gives lowest marks to the economy of a place and provides a greater emphasis on the institutional, social and physical aspects of a city’s experience. Lucknow received just two marks for waste water management, 2.5 for solid waste management and 2.15 out of 5 for reducing pollution.

The World Health Organisation listed Lucknow as the 3rd most polluted city in India in their 2018 database while in February 2019, a study by IIT-Kanpur and the Shakti Foundation revealed Lucknow suffered poor air quality for 70 per cent of the days between October-November 2018 with PM2.5 levels crossing 170 microgram/m3.

As a NCAP Non-attainment city Lucknow has 4 continuous monitoring station (CAMS) reporting data for all types of pollutants including details on PM10, SO2 and NO2. Sources of pollution include vehicular emissions, dust caused by construction of the Metro Rail and other rampant construction in the city, industrial effluents, wood burning for fuel and other domestic needs and garbage burning.

“The weather plays the most important role in pollution levels. The wind velocity in the first two weeks of October is really low which does not allow dust particles to disperse so they remain suspended in air. Fall in day and night temperatures also contributes to increased pollution levels by not allowing the dust to rise up with warm air,” explained Professor Dhruv Sen Singh, Director, Climate Monitoring Station, Lucknow University. “Multiple factors are responsible for the reduction in air quality which include the addition of more vehicles on road, long traffic jams, bad roads, and dust from construction sites,” added Alok Dhawan, Director, CSIR-Indian Institute of Toxicology and Research. According to Sumit Sharma at The Energy and Resources Institute, “While Delhi can attribute 35 per cent of its air pollution to in house sources such as garbage burning, road dust and transport, UP generates 50 per cent of its pollution in house.”

A study, Global Burden of Disease Study 2017, by the British medical journal Lancet revealed that air pollution is now the second largest cause of pre-mature deaths in India after cardio-vascular diseases. In the 1990s, air pollution was the third largest cause of such deaths in India. Experts from more than 100 institutions, including the Indian Council of Medical Research and the Institute for Health Metrics and Evaluation at the University of Washington, said that Uttar Pradesh had the second-highest disease burden linked directly to air pollution among all states as of 2016, after Rajasthan. In recent times Lucknow has seen a rise in the number of diseases linked to toxic air levels including Bronchitis, Asthma, COPD, Tuberculosis, Lung cancer, eye infections, high blood pressure, heart congestion and Pneumonia.

The UP state government has put in place certain measures to tackle the issue.

2018, November
The state government asked the civil aviation ministry for approval regarding artificial rains  in Kanpur through cloud-seeding. UP government identified 10 cities including Lucknow for 100 per cent Multi-Modal Electric Public Transport (passenger and goods) by 2030. The state government released the EV Manufacturing Policy 2018 to incentivize EV battery and charging infrastructure development in the state through public and private interventions. The policy also includes incentives to buyers to create demand. UP chief secretary Rahul Bhatnagar issued directions to senior officials to take “effective measures regularly” to control air pollution in different cities in UP. Bhatnagar asked government departments to ensure stringent action through a drive against polluting vehicles and also banned the burning of garbage inside city limits.

Action taken by the Central Government to curb pollution:

2018:  The Niti Aayog proposed a 15-point action plan to combat air pollution called Breathe India. The National Auto Policy was released which included EV, CNG, biofuels and hydrogen vehicles, though without timelines and no link with the EV 2030 Vision, FAME II or Make in India. Under the FAME II India scheme around Rs 5,500 crore over a five year period has been set aside to provide grants for all kinds of electric vehicles. The Indian government also sealed a deal with the World Bank, GIZ, ADB, SDC, AFD and Bloomberg Philanthropies, to build capacities of all 102 polluted cities across the country. The initial small budget of Rs 300 crore is meant to expand air quality monitoring capacities in states, set up national emission inventories and conduct source apportionment studies in cities to identify nationwide pollution hotspots. Studies in Delhi and Kanpur have already been initiated.

2017: The Railways Ministry announced new reforms and services such as Roll On-Roll Off and long-term contracts to enhance freight traffic and reduce dependence on commercial vehicles.

2016: The Government of India announced the advancement of vehicular emissions and fuel quality norms to BS-VI levels by the year 2020 across the country. All non-attainment cities were given a set of 42 action points to improve air quality and as a follow-up, 94 cities were asked to prepare detailed action plans. The states concerned had been urged to steer implementation of action plans in these cities. The CPCB has also launch a mobile app – SAMEER – for grievance redressal.

2015: The Government of India announced the FAME scheme under NEMMP to promote Electric Vehicles. EV manufacturers and sellers say they want a policy and regulatory framework which lays out a roadmap for creating an ecosystem comprising, most importantly, of charging stations, as well as rolling out incentives for both manufacturing and purchasing EVs.