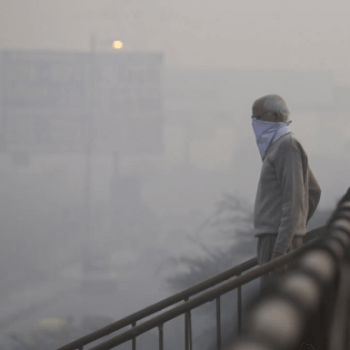 Faridabad Fights For Clean Air
Faridabad is the most populous and largest city in the state of Haryana and is also part of the National Capital Region of Delhi. A leading industrial centre, Faridabad was once called the ‘Manchester of north India’. The Government of India included the city in the second list of Smart Cities Mission in 2016. Faridabad […]

Faridabad is the most populous and largest city in the state of Haryana and is also part of the National Capital Region of Delhi. A leading industrial centre, Faridabad was once called the ‘Manchester of north India’. The Government of India included the city in the second list of Smart Cities Mission in 2016. Faridabad has been described as the 8th fastest growing city in the world and the 3rd fastest in India by City Mayors Foundation Survey 2018 while it ranked 72nd in Ease of Living Index 2018. But industrialization has come at a price. Although it has a long history of pollution, Faridabad doesn’t yet feature in the non-attainment cities list of the National Clean Air Programme (NCAP) despite clocking 413 for PM2.5 (severe) level in October 2018.

The city has a Continuous Monitoring Station (CAMS) which provides reports on data for all types of pollutants. The major sources of air pollution in Faridabad include vehicles, construction and road dust, crop stubble burning, garbage burning and industries. As a result, there has been an increase in the number of infections and allergies, bronchitis, breathlessness, chronic cough, sneezing, itching and eye problems.

“Heat waves and stronger sunshine increase the frequency of days during summer when ozone begins to cross the standards posing public health risk, especially to those suffering from asthma and respiratory problems. Ground- level ozone is not directly emitted by any source. This is formed when oxides of nitrogen (NOx) and a range of volatile gases primarily from vehicles and other sources are exposed to each other in sunlight,” the CSE said. Delhi and its neighboring cities - Faridabad and Gurgaon- have witnessed "substantial ozone build-up" from February to May (2018), CSE claimed, cautioning that these are early signs of a "dangerous trend". Gurgaon and Faridabad, in the National Capital Region (NCR), have recorded the "highest number" of days with ozone levels exceeding normal standards.

About a quarter of elderly citizens (21 per cent) in Delhi-NCR during a survey by Agewell Foundation claimed that their major concern is rising pollution level during winters, which causes many health related problems and restricts their outings. “During winters with high level of pollution, older people are forced to stay inside their houses. At this juncture, it’s our moral responsibility to care for elders and keep them engaged in some kind of activities of their choice. We should share the warmth with them, as they just need warmth," Himanshu Rath, Chairman, Agewell Foundation said. "Even before the health risk from particulate matter could be addressed, ozone has raised its ugly head in Delhi and NCR. The comprehensive action plan will require stringent and time-bound action to avert a public health crisis," said Anumita Roy Chowdhury, CSE, in June 2018.

The Pollution Control Board has taken a number of steps to combat the crisis in recent years:

Year 2018 : The NHAI, HUDA and Public Works Departments have been directed by the HSPCB to contain dust during their construction activities. Teams have been constituted by HUDA, Urban Local Bodies, HSPCB and District Administration to monitor violations and impose penalties on violation in construction projects, pollution control norms for vehicles, burning of garbage. Mechanical sweeping machines and vacuum machines are being used in Gurugram and Faridabad for cleaning purposes to reduce road dust. Vehicles not destined for these cities are diverted through another route. Three more CAAQMS have been ordered to be installed in Faridabad and Gurugram. A pollution sources attribution study is being planned.

Year 2017: Following a Supreme Court order, CPCB issued directions regarding prohibition on the use of Petroleum Coke and furnace oil in NCR states. EPCA and state pollution boards will need to review and monitor progress as per notification issued by MoEF&CC.

Year 2015: Annual report of HSPCB lists a number of orders issued for the closure of polluting industries.

Action taken by the Judiciary to curb pollution include:

Year 2019: The Haryana government got the Punjab Land Preservation (Haryana Amendment) Bill of 2019 passed in the state’s legislative assembly that will open up a large swathe of formerly protected land, especially the Aravalli hills, for mining, construction and urbanisation. The hills are instrumental in checking the spread of dust and sand from Rajasthan towards the Indo- Gangetic plains. “We are concerned with Aravalli. If you are doing anything with Aravalli or Kant Enclave (where the top court had ordered demolition of buildings due to illegal constructions in forest area) you will be in trouble. If you are doing anything with forest, you will be in trouble. We are telling you,” the bench told the Solicitor General representing the Haryana Government.

Year 2018: As of October 25, 2018 35 percent of brick kilns in NCR states had converted to less polluting zig-zag technology, with 1601 units still remaining in Haryana. The association of brick kiln owners sought direction from National Green Tribunal to HSPCB to allow them to operate from February 2019 after a temporary closure till January 2019 when pollution remains high. NGT disposed of the application saying HSPCB orders are clear and no further orders are necessary.

Year 2017: The Supreme Court banned the use of Petroleum (Pet) Coke and Furnace Oil (FO) for combustion in the states of Delhi, Haryana, Rajasthan and Uttar Pradesh on October 24, 2017. Furthermore, certain industry sectors, namely cement, lime kiln and calcium carbide have been allowed the use of Pet Coke in their manufacturing process though under regulation. The court also directed MoEF&CC and CPCB to fix and implement SOx and NOx emission standards for 34 industries by December 31, 2017. The MoEF& CC issued standards for 23 industries by March 2018.

Actions and policies by the State Government:

Year 2018: “Diesel vehicles of more than 10 years age have been banned from registration in Faridabad, Gurugram and Jhajjar districts,” said Vipul Goel, Minister of Environment & Industries, Government of Haryana. The Delhi Metro extension linking Faridabad, Gurugram and Ballabhgarh with Badarpur between 2015-18; all stations and depot to be powered by solar panels, LED lighting, and CO2 censors installed for good quality air. Faridabad-Gurugram link will be ready by 2021 while Greater Noida and Greater Faridabad will also be linked