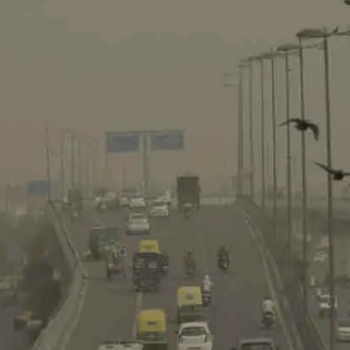 Delhi, A City With History But No Memory Of Toxic Air Toll
The air quality in Delhi, according to a World Health Organisation (WHO) survey of 1600 world cities, is the worst of any city in the world. Poor quality air irreversibly damages the lungs of 2.2 million or 50 per cent of all children in Delhi. The capital city was ranked 65th in the Ease of Living […]

The air quality in Delhi, according to a World Health Organisation (WHO) survey of 1600 world cities, is the worst of any city in the world. Poor quality air irreversibly damages the lungs of 2.2 million or 50 per cent of all children in Delhi. The capital city was ranked 65th in the Ease of Living Index 2018 behind other NCR towns including Gurugram and Ghaziabad which ranked 7th and 20th respectively in their efforts to reduce pollution. Despite Delhi having 38 air quality monitoring stations it is listed as a non-attainment city under National Clean Air Programme (NCAP).

It’s no surprise then that a large number of citizens in Delhi suffer from chronic respiratory diseases. Hospitals report a sharp increase in the number of cases of eye infections, severe cough, sneezing and respiratory issues and an aggravation of various allergies.

An IIT, Kanpur report revealed that only 30 percent of the pollution in land-locked Delhi is due to local sources, while a staggering 70 per cent has been traced to sources in the NCR NCR and beyond, including Punjab and Haryana.

According to an article published in Environmental Health Perspectives an effective measure to curb pollution would be to curtail the use of solid fuel in households. Found in abundance in the rural areas surrounding Delhi, it is relevant to point out that emissions from this one source alone account for 25-50 per cent of fine particles. “Heat waves and stronger sunshine increase the frequency of days during summer when ozone begins to cross the standards posing public health risk, especially to those suffering from asthma and respiratory problems. Ground- level ozone is not directly emitted by any source. This is formed when oxides of nitrogen (NOx) and a range of volatile gases primarily from vehicles and other sources are exposed to each other in sunlight,” the Centre for Science and Environment said.

The citizens of Delhi who are already struggling with the fall-out of rampant construction, lack of road safety, a scarcity of water, extremely harsh weather, and a steady increase in the city’s population due to migration now have to put up with toxic levels of air pollution as well.

Amongst other things, citizens of Delhi say they want safe and functional walking and cycling infrastructure, along with a good bus transport system for last-mile connectivity besides clean air and an assured supply of water and power. As part of the Smart City and AMRUT schemes, they hope these needs will soon be realized.

Some much-needed steps taken by the Delhi state government to tackle the problem included:

Year - 2018 :Delhi Metro & Rail
Delhi Metro extension linking Faridabad, Gurugram and Ballabhgarh with Badarpur between 2015-18; all stations and depot to be powered by solar panels, LED lighting, and CO2 censors installed for good quality air. Faridabad-Gurugram link will be ready by 2021 while Greater Noida and Greater Faridabad will also be linked. A high-speed rail network connecting Delhi to Rajasthan via South Haryana/Gurugram will begin in March 2019 to provide a convenient mode of travel for daily commuters from southern Haryana to Delhi. The Delhi government has also started a pre-Diwali crackdown on polluting vehicles. As part of this exercise, visibly polluting vehicles, those without PUC certificates, overloaded trucks and commercial vehicles would be stopped, with penalties ranging from fines to impounding of the concerned vehicle.

Draft Electric Vehicles Policy
The Delhi government released the draft "Electric Vehicle Policy 2018" to make 25 per cent of new vehicle registrations electric by 2023. The policy approach is adoption rather than manufacturing focusing on two key vehicle segments - two-wheelers and public/shared transport - that make for nearly 60-65 per cent of the total passenger kilometres in Delhi and together contribute to about 55 per cent of PM and 50 per cent of NOx emissions. These vehicles have achieved parity in terms of life cycle, total cost of ownership with ICE (Internal Combustion Engine – diesel and petrol operated) vehicles. Through the policy, the AAP government has planned to create a significant corpus of funds through a cross-subsidisation concept called 'feebate' i.e. by adopting measures by which inefficient or polluting vehicles incur a surcharge (fee-) while efficient ones receive a rebate (-bate). The proposed incentives in the policy top-up the incentives of FAME scheme from central government, thereby further reducing EV prices. Additionally, a “pollution cess” will be levied from April 2019, the funds from which will also go towards subsidising the purchase of electric vehicles. The policy focus is on enabling the development of an electric mobility ecosystem within the state, it focuses on the state’s role as a regulator of important components of the ecosystem such as a network for private and public charging infrastructure. Though, the lack of restrictions on the purchase of petrol- or diesel-run vehicles could prove an obstacle in implementing the policy, claim experts.

Green Budget and consent to fell trees
The AAP government  presented its Rs 53,000 crore budget for 2018-19 in the Assembly, which laid emphasis on environment, health, education and water. This is the first “Green budget” of the government for effective containment of pollution in the city, the Deputy CM said in the budget session of the Assembly. “We are going to thread 26 programmes and schemes of Transport, Power, Environment and PWD for devising a unified system of pollution control, bringing down levels of different pollutants,” he added

Odd-Even Traffic Rule
In January and April 2016, the government of Delhi piloted an “odd-even” traffic rule which mandated that only cars with odd (even) numbered license plates could play on odd (even) dates. Analysis indicates even if the program resulted in reductions in traffic congestion and air pollution in the city, the odd-even program may not be a good long-term measure to reduce air pollution in New Delhi.

City-focused actions
The government said a Comprehensive Action Plan (CAP) for management of air pollution "specifically" for Delhi-NCR has been finalised by the Environment Ministry. The plan has a number of measures including actions to reduce vehicular emissions and control dust from constructions. Delhi BJP president Manoj Tiwari distributed free anti-pollution air masks to public at the Palika Bazaar in New Delhi. He reportedly handed over more than 1,000 masks. He asked the party-ruled municipal corporations to step in to tackle the rising air pollution in the city as the AAP government has "failed" to take effective measures.

Policies and activities by the Union Government

2019: NCAP with Rs. 300 crore launched as a mid-term, five-year action plan from 2019 to reduce air pollution by 20-30 per cent by 2024 in all 102 non-attainment cities, taking 2017 as the base year. The MoEF&CC has planned to replicate the  Clean Air for Delhi’ campaign in the non-attainment NCAP cities in due course. The Campaign was launched in the Capital on February 10 jointly by the central and Delhi governments to address all sources of pollution. As part of the Campaign, 70 teams had been deployed across the city to monitor sources of air pollution and also to take on-the-spot action against violators

2018: The EPCA was reconstituted under the provisions of the Environment (Protection) Act, 1986 on October 3, 2018, by including new members, with the mandate of ‘improving the quality of environment’, in Delhi. The reason why EPCA is an authority, and not just an advisory committee, is because it has powers similar to those enjoyed by the Centre. Specifically, it can issue directions in writing to any person, officer or authority, including for –but not limited to – stoppage of electricity, water and other services. If its directions are not followed, it has powers to file criminal complaints (under section 19 of the Act) before courts.

2017: The central government launched the "City Liveability Index" - a first of its kind initiative introduced by the Urban Development Ministry - to measure the quality of life in 116 major cities including capital cities and those with population over one million. The cities will be assessed on a comprehensive set of 79 parameters to capture the extent and quality of infrastructure including availability of roads, education and health care, mobility, employment opportunities, emergency response, grievance redressal systems, pollution, availability of open, green spaces, and culture. The Railways Ministry announced new reforms and services such as Roll On-Roll Off and long-term contracts to enhance freight traffic and reduce dependence on commercial vehicles. NITI Aayog formed task forces in collaboration with CII on clean fuel, clean transport, clean industries and biomass management to submit a roadmap with recommendations for managing the air-quality of the Indo-Gangetic plain as a whole.

2016: National Capital Region Planning Board (NCPRB), an urban planning body for the NCR, asked the NCR states to submit action plans for air pollution, increase forest cover to 20 per cent of total geographical area, and to speed up 14 inter-state connectivity links for seamless travel in the region.  The Government of India announced the advancement of vehicular emissions and fuel quality norms to BS-VI levels by the year 2020 across the country.

2015: The Government of India announced FAME scheme under NEMMP to promote electric vehicles. Instead, EV manufacturers and sellers were expecting a policy and regulatory framework laying out a roadmap for creating an ecosystem comprising, most importantly, charging stations, as well as rolling out incentives for both manufacturing and purchasing EVs