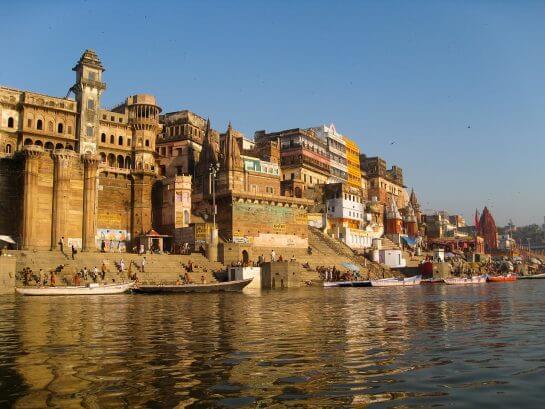 Charity Begins At Home: BJP should flag off National Clean Air Plan from PM Modi’s constituency
Varanasi has the most toxic air in India: report  Varanasi’s claim to fame this poll season is the fact that Prime Minister Narender Modi is seeking re-election from this political constituency in the on-going elections, but the sacred city, also known as Banaras or Kashi, is now making news for another reason. According to a […]

Varanasi has the most toxic air in India: report

Varanasi’s claim to fame this poll season is the fact that Prime Minister Narender Modi is seeking re-election from this political constituency in the on-going elections, but the sacred city, also known as Banaras or Kashi, is now making news for another reason. According to a report by the India-based environmental group Climate Trends, Varanasi is one of India’s most polluted cities.  The report, titled Political Leaders Position & Action on Air Quality 2014-19, which covers Delhi and 13 cities in Uttar Pradesh, Bihar, Haryana and Kashmir has studied air pollution data from various international and national agencies as well as undertaken primary surveys in these cities.

“Timeless city becoming breathless; air quality in Varanasi has been deteriorating faster… largely due to lot of construction in the city,” claims the report. Varanasi was ranked the third-most polluted in the world by the World Health Organisation in 2018. The concentration of particulate matter is growing at the highest rate in Varanasi (1.9 µg/m3), which has taken the PM2.5 exposure up by 28.5 µg/m3 in the last 17 years, which is three times the WHO annual standards. The Air Quality Index (AQI) for Varanasi in November 2017 reached an alarming 491, just nine short of 500 that indicates a “public health emergency” as per Central Pollution Control Board (CPCB). This was much worse than Delhi’s AQI of 468 that day. CPCB data, released in 2015, ranked the air of Varanasi as one of the most toxic in the country with zero ‘good’ quality days in the year.

While the report claims rampant construction is the culprit others sources of pollution in Varanasi include vehicles, industry, diesel generators and brick kilns, domestic cooking and heating, garbage burning, cremation fires, and urban air shed pollution from surrounding regions. Manufacturing accounts for the most employment in the city and includes household industries and small-scale industries. The overall mobility scenario within the city is in a poor state. According to the report 50 per cent of the city’s carriageway capacity in the heart of Varanasi is occupied by irregular parking as no proper facilities exist.

It’s no surprise then that such high pollution levels have taken a toll on public health. There has been a sharp increase in respiratory diseases in the city from 2013 which includes bronchial allergies and asthma, chest infections, allergic rhinitis, sinusitis, skin allergies, urticaria, COPD and Pneumonia.

The government has taken special measures to improve the situation. In November 2018, ten cities including Varanasi were identified for 100 per cent Multi-Modal Electric Public Transport (passenger and goods) by 2030. The state government also released an EV Manufacturing Policy 2018 to incentivise EV battery and charging infrastructure development in the state through public and private interventions. The policy includes an incentive to buyers to create demand. In addition to this last year the Prime Minister suggested the public use the inland water-way for transport as this would save time and money, reduce congestion on roads, reduce the cost of fuel, and reduce vehicular pollution.

In the past the Prime Minister has focused his efforts on the beautification and renovation of the holy city which attracts large numbers of tourists through the year. Some of his initiatives include installing LED lighting at all the bathing ghats on the River Ganga, widening and re-paving major roads, LED streetlamps, underground electricity cabling is being attempted in the entire city and setting up new sewage treatment plants.

This poll season the environment found special mention in the manifestos of both the BJP and Congress party. While the BJP promises to convert the National Clean Air Plan into a mission and focus on 102 most polluted cities in the country, the Congress claims it will  focus on the issues of ‘Environment And Climate Change’ to combat global warming and work towards the protection of the environment. The United Nations in 2018 singled out Modi for special praise for his work on the environment. If he manages to win a second term from Varanasi on May 23 perhaps Modi can start the National Clean Air Plan from his own home turf.